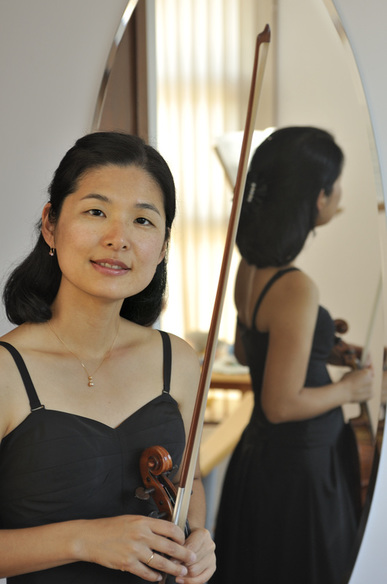 Born in Japan, Fumika Yamamura started her musical studies with just three years of age, enrolling in the Suzuki Method for piano. Later on, she chose the violin when she was six years old, soon entering Toho Music Conservatory in Tokyo, where she was given various opportunities to perform as soloist and concertmaster. During those years she won a second prize and a third prize in the Japan National Student Competition, a third prize in the Tama Fresh Music Competition, and for two years in a row was awarded the Special Excellence Prize in the Hokkaido Summer Music Festival. She appeared performing on the musical educational program of Japan’s National Television NHK.
She was selected to participate in Toho Conservatory’s international exchange programs with Paris Conservatoire de Musique and Curtis Music Conservatory, and was granted a scholarship to participate in the Tanglewood Music Festival in USA, playing under conductors like André Previn, Leon Fleischer, and Seiji Ozawa.
In 1997 she graduated from Toho Music Conservatory with honor, and moved to Germany for her graduate studies, where she was student of Valery Klimov at Musikhochschule Saarbrücken, finishing the Konzertexamen Violine in 1999. To complete her studies, she moved to USA to study with Dr. Eduard Schmieder at Southern Methodist University in Dallas, where she was scholarship holder in the Artist Certificate program.
She participated in various masterclasses, including Mozarteum in Salzburg, Holland Music Sessions, Ticino Musica (Switzerland), St. Petersburg, Mannheim, Mainz, Utrecht, etc.
Since 2002, Fumika Yamamura lives in La Coruña in Spain. In 2003 she was assistant soloist at the Orquesta Sinfónica de Barcelona, and is presently principal second violinist at the Orquesta Sinfónica de Galicia in La Coruña.
She is actively involved in many chamber music cycles, as soloist in recitals with piano, formerly as 1st violinist of the Artemis Ensemble and now of the Schubert String Quartet and the piano quartet Cuarteto del Pino, among many other different groups, most of her concerts being recorded by Galician Radio. She also dedicates herself to coaching and teaching, as well as to her orchestra's youth orchestra project, Joven Orquesta de la Sinfónica de Galicia.
Back in her home country, she regularly collaborates with important orchestras, such as Tokyo Symphony Orchestra, Tokyo Metropolitan Symphony Orchestra, and Tokyo Philharmonic Orchestra.